Notes: Hugo tells us the Café Musain was on the Place Saint-Michel, but the spot that bears that name nowadays was called the Place du Pont-Saint-Michel back in the 1830s and the Place Saint-Michel itself was by the Jardin du Luxembourg. It’s now called the Place Edmond Rostand. Exhaustive and painstaking research has pinpointed its location as the spot in the photo currently occupied by… no, not the McDonald’s as previously stated, but the Quality Burger Restaurant across the Rue Soufflot from the McDonald’s. Hey, at least they have a ball pit! 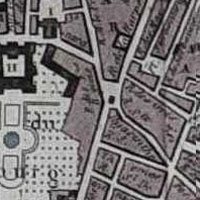 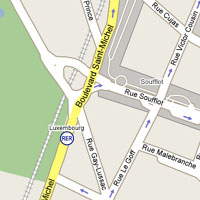 There’s the Quality Burger Restaurant off to the right!

Aaah, the view from the entrance to the Musain…

More views from the “Musain,” this time on the boulevard side.

The Amis seem cursed to have their gathering places replaced by Body One lingerie shops… this one is halfway between the Quality Burger Restaurant and the Rue Cujas, aka the Rue des Grès where the exit from the back room was.

Not this Place Saint-Michel! You want the Place Edmond Rostand.