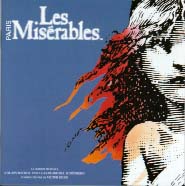 I cannot say enough in praise of the Paris Revival Cast. It’s quite possibly my favorite Les Mis recording ever, from the opening right down to the most moving finale I’ve ever heard in this show. There are barely any weak points in the cast, and quite a few standouts. Very much worth whatever exorbitant price you’ll have to pay to get it imported.

Despite the many wonderful performers here, the most remarkable thing about the PRC is its cohesion. It presents a more-or-less uniform sound; in contrast to, say, the Duisburg recording’s brassy exuberance, which begs to be turned up loud, this recording emphasizes the quieter and more contemplative side of the musical and should ideally be listened to on headphones in a quiet room. It won’t make you want to march along during One Day More, but it might just bring you to tears–especially if your French is good enough to catch the translation, which mixes lyrics directly from the OFC with a few literal translations of the English lyrics and some new material.

The cast itself has several members imported from the Montréal production, which was the first to be performed in French since the original 1980 version of the show. Not surprisingly, Robert Marien, Louise Pitre, and Stéphanie Martin are the highlights of this recording.

Marien copes well with the graceful but less-than-direct translations of “Who Am I?” and “Bring Him Home,” delivering a consistent and touching Valjean who binds the recording together. Louise Pitre, meanwhile, is really something else. Her Fantine is quiet, sad, and desperate, but what’s truly remarkable is that in all three of her big moments–“I Dreamed a Dream,” “Come to Me,” and her reappearance during the finale–she managed to make me weep. Not just feel bad for her and think she did well as Fantine–actually turned on the waterworks. She does get some of the best lyrics, which I’ve heard were responsible for making Pitre herself break down in tears during rehearsals, but the main credit goes to her.

When I heard there was a French revival recording, I was expecting an Eponine more in line with Hugo’s version than the usual pop princess version of English productions. Harsh-voiced, perhaps, like a great number of European Eponines, or quiet and pitiable like Frances Ruffelle, Kaho Shimada, or the OFC’s Marie. Great was my surprise when I heard Stéphanie Martin, who reclaims the spunky, pleasant-voiced version of Eponine by doing it really, really well. Her voice is a joy to listen to, and this is coming from someone who absolutely detests pop Eponines.

Patrick Rocca gives a deep-voiced and dignified Javert, rather flat and stiff in his interpretation and prone to mumbling, but he sings well and doesn’t actively annoy me. Laurent Gendron’s Thénardier is oily and slimy in a delightful way. Alexis Tomassian is puregamin, which can’t really be recaptured in a language other than French.

Though I’ve heard his work in later roles described as “scary” (and I was slightly disturbed by his Courfeyrac on the TAC), Jérôme Pradon plays the lovesick fool to perfection as Marius. His joy in “In My Life” and “A Heart Full of Love” is almost palpable. Marie Zamora has a very sweet and youthful voice, which is par for the course in a European production but should be a welcome relief for those who’ve only heard American Cosettes. And they sound terribly, terribly cute together.

Julien Combey’s pouty and effeminate-sounding Enjolras is the only real weak point on this recording. Even if you think an effeminate Enjolras is a good thing, or at least cute, the role calls for a clearer voice. (Props, though, to Juan Pablo Armitano as Feuilly, who makes a lot out of very few lines.)

Also of note is the translation; I don’t have much to compare it to, as I only speak three languages, but it’s better than both the English and German lyrics by a significant margin. Maybe it’s because Boublil and Schönberg were working on it themselves, or maybe it’s naturally better in French. I think the words are a large part of what makes this recording so wonderful.

And I couldn’t get through a review of the PRC without mentioning the finale. Oh, the finale. From Fantine’s appearance through to the last moment, it’s just heavenly. Louise Pitre is in top form, the DYHTPS reprise has amazing lyrics, and the crescendo…! Just when I thought this recording couldn’t get any better.