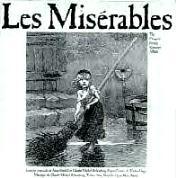 Reactions to this recording tend to be severe one way or the other; some people love it, others hate it. I myself wasn’t terribly fond of it the first time I heard it, and kept it only for completeness’ sake, but since then it’s grown on me immensely. It’s an indispensible part of a diehard fan’s collection; this recording and the original London cast recording help trace the show’s development, from the rough version on this recording to the polished result that would eventually wind up on Broadway.

One place where the concept album definitely falls short of the finished version is narrative structure. Fantine is the only character who’s really fleshed out, followed maybe by Marius; Valjean makes appearances now and then, but never gets a lot of attention paid to him. A lot of the coherence of the OFC rests on prior knowledge of the plot of Les Misérables, knowledge that French audiences were assumed to already have. The prologue and the Bishop of Digne are left out entirely and the action commences in Montreuil-sur-Mer; no mention on the recording is made of the Champmathieu affair; we don’t see Valjean letting Javert go. It works, for those familiar with the plot, but doesn’t present a coherent plot and would be mostly unintelligible for anyone not familiar. On the bright side, however, there’s little active tampering with Hugo’s story: “On My Own,” “Bring Him Home,” “Empty Chairs at Empty Tables,” and the like are still far off at this point.

The incoherence of the plot aside, I actually prefer the music on this recording to the “finished product.” It sounds rough, grim, gritty, and–well–miserable, in a way that the current show doesn’t. The use of synthesizers is minimal, there are some neat distorted guitars (especially in “Donnez,” now the Paris “Look Down” scene), and the overall effect is far less showy. Also, the lyrics are superior to their often-clunky English counterparts, perhaps because Les Misérables is naturally more graceful in French, perhaps because this was the original conception of the show.

Listening to this version after long familiarity with the show’s current incarnation can be a bit jarring. “L’air de la misère” follows the exact tune of “On My Own,” but is given to Fantine and has a completely different subject matter. Hearing favorite songs orchestrated in a completely different manner is odd. There are conspicuous absences: the three songs mentioned above aren’t present in any form, “Who Am I?” and “Lovely Ladies” are only snatches of melody in the middle of other songs, songs have been shuffled around, there’s material that never made it to the final cut. The show ends quietly with Valjean’s peaceful death, no dead ladies carrying him off to heaven or reprise of “Do You Hear the People Sing,” but without the angst of “Turning” and “Empty Chairs” weighing down on it, this ending doesn’t seem unnecessarily sad.

High points: The best version of “Do You Hear the People Sing” ever, hands down. “L’un vers l’autre,” a solo for Eponine that was cut entirely from the English version and replaced with the more melodramatic “On My Own.” The instrumental lead-in to “Castle on a Cloud,” which some people find interminable but which I like. Most all of “Donnez.” The setting of “Drink With Me” to Hugo’s actual poetry. Gavroche’s death. The ending. The overall tone of the music.

Low points: That ridiculous disco beat in the café scene. An utterly pointless scene between Marius and his grandfather. The narrative wonkiness. I personally don’t think Rose Laurens sounds like a Fantine; I can appreciate her performance sometimes, but she sounds too harsh to me. Dislike the Javert on this recording. And did I mention disco Amis?!