Location: The quay of the Right Bank between the Pont au Change and the Pont Notre-Dame

Notes: Javert did not, as is commonly believed, throw himself off a bridge–he jumped off the embankment on the side of the river, into a part that’s placid enough right now but had nasty rapids back in 1832. Before he jumped, he left several notes for the good of the service at the Place du Châtelet police station, which still exists opposite the Pont Notre-Dame. 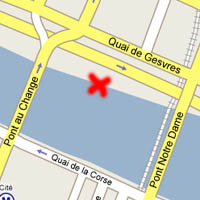