Unlike almost every other setting in Les Mis, the convent of Petit-Picpus has no exact corresponding location in real life, not even in the Paris of the 19th century. It was originally named as the very real monastery of the Bénédictines du Saint-Sacrement in the Latin Quarter, but Hugo, already walking a fine line with the censors, changed its name and moved it to a more-or-less fictional neighborhood in the vicinity of the modern Gare de Lyon. The final version is an amalgamation of at least three different convents, so we can name at least four places as “the location of the convent of Petit-Picpus”:

Former convent in the Rue Tournefort

Former convent in the Rue Tournefort

Notes: The Picpus cemetery houses two mass graves of those guillotined at the Place de la Nation in the summer of 1794.

Notes: The folks behind Carnavalet’s Paris in the time of Les Misérables exhibit name the rue Traversière as the modern analogue to the rue du Chemin-Vert-Saint-Antoine that Jean Valjean fled through. Due to its shape on old maps and its proximity to both the garden of the Abbaye des Religieuses de Saint-Antoine and the old market Hugo refers to as the Marché Lenoir, I’m more inclined to think the Y-shaped group of streets Hugo describes is loosely inspired by the old rue des Charbonniers, roughly corresponding to today’s rue Van Gogh. Since the convent was just to the east of the top of the Y shape, that would put it somewhere between the Hôpital Saint-Antoine and the Square Saint-Eloi. On the 18th-century map below, purple is the future Pont d’Austerlitz, green is the rue Traversière, red is the future location of the Marché Saint-Martin (which connected back to the boulevard via the rue Lenoir, hence Hugo’s name for it), and blue is the rue des Charbonniers and the little alley attached to it. 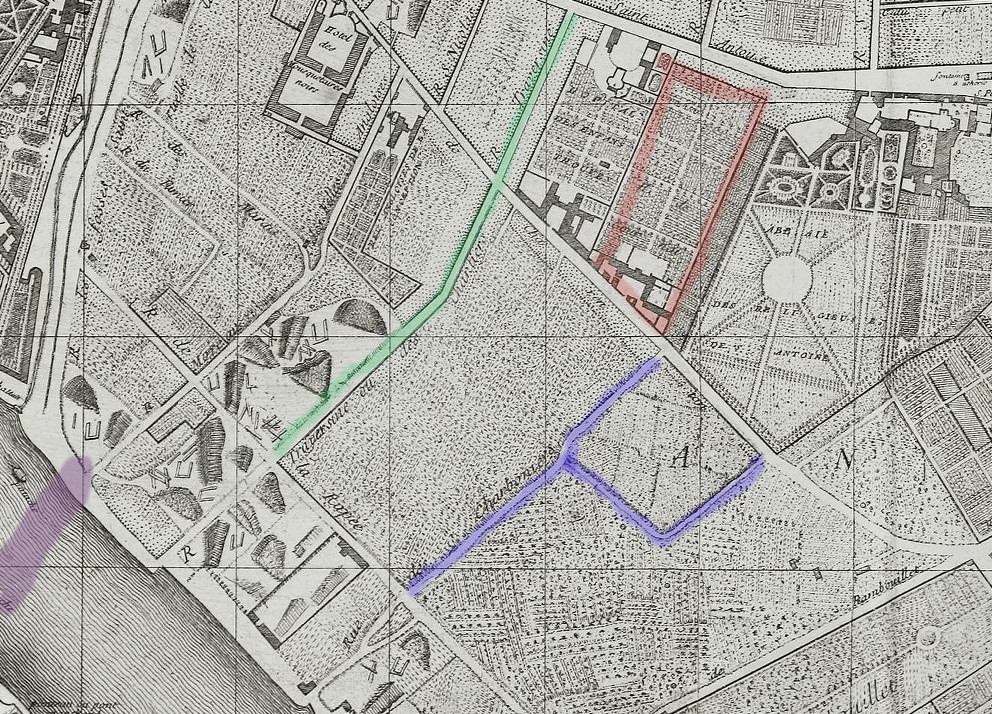 On the modern map below, the rue Traversière is again picked out in green and the rue Van Gogh is in blue, with light blue marking the possible (approximate) correspondence with the other parts of the rue des Charbonniers, notably the rue Hector Malot where it joins the rue de Charenton. 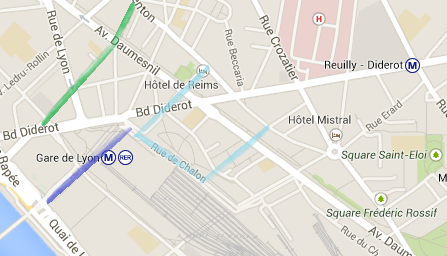