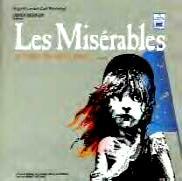 Let me preface this review with the disclaimer that the OLC was my first exposure to the musical, and as such I have a massive soft spot for it that I will never be able to erase. Sorry, folks, but this review is going to be biased and there’s nothing I can do about it.

One of the reasons this recording is so cool is that, along with the French concept album, it helps trace the progression of the show. It sounds very similar to the present version, but there are variations. The overture is different. “Stars” is placed before “Look Down,” has a different (and to my mind, better) intro, and ends with a simple repetition of a verse instead of the dramatic “Lord, let me find him” part. Gavroche still has an extended and singularly irritating version of “Little People.” Cosette gets a beautiful solo entitled “I Saw Him Once.” Grantaire doesn’t have a verse in “Drink With Me.” And so on and so forth.

Frankly, for the most part I liked it as it was. “I Saw Him Once” didn’t deserve the chop, the old ending to “Stars” stressed Javert’s devotion to duty instead of his obesssive mania about catching Valjean, and did we really need the extra pathos of Grantaire’s verse of “Drink With Me?” But what’s done is done, and all I can do is cling to my OLC and grouse. (“Little People,” however, fully deserved to be put out of its misery.)

As for the cast, the only performance on this recording I really dislike is Patti LuPone as Fantine. She sounds bored in the role, and there’s an almost jaded quality to her voice that makes her sound too old to be Fantine. David Burt as Enjolras I could take or leave. His voice is much softer than has become ‘traditional’ for an Enjolras, which I actually appreciate–who knows what would have become of the role if Michael Maguire hadn’t set the precedent of loud, manly-man Enjolrati on stage? Perhaps we’d see more of the quiet dignity of Hugo’s Enjolras. On the other hand, there are spots where I really don’t like Burt’s voice for reasons that have nothing to do with the softness.

Enough has been said about Colm Wilkinson by others, I think. He’s an excellent Valjean, if a tad overrated. Roger Allam has the opposite problem: he’s quite possibly my favorite Javert ever, but he constantly gets passed over in favor of Philip Quast. I like his sharp voice and the snide edge he gives Javert, and his voice is just a joy to listen to. Mmmm.

I don’t consider Frances Ruffelle the definitive Eponine, if there is such a thing, but she has a very specific interpretation and she makes it work. I might not picture an Eponine with such a whiny voice, but she makes me believe it, and I love her Cockney accent in the Plumet attack. (The entire chorus makes heavy use of Cockney accents, actually, and I love it.)

And then there’s Rebecca Caine. Ahhhhh. The only English-language Cosette who doesn’t drive me absolutely bonkers, and in fact I love every note she sings. Her voice is so sweet, so pure, without the grating quality of Judy Kuhn or the shrillness of Tracy Shayne. She’s wonderful.

One last thing about this recording is that the tempos are noticeably slower than on other recordings. I personally like it, as it adds to the ponderous gravity of the show and is remniscient of the OFC; but it drives other people nuts, especially in the Confrontation.