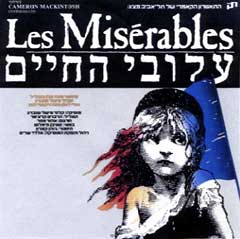 The Tel Aviv cast is perhaps the most subdued of all the recordings I’ve listened to so far. Though there’s always plenty of lively background chatter in the factory, inn, and café scenes, the cast is overall quite soft. It works well in the slower numbers, but the lack of significant dynamic increases in One Day More and the finale is quite noticeable.

Dudu Fisher’s Valjean is erratic, going from a harsh tone in One Day More to a breathtaking Bring Him Home. Though the recording is a rather brief 13-track highlights, from the sound of “Stars” it doesn’t sound like he had much to play off in Elidor Yeini, who doesn’t have the force necessary for Javert.

Riki Gal gives a moving version of “I Dreamed a Dream,” even softer and more despairing than Louise Pitre. In contrast to some of the actresses who still show some spunk at this point, her Fantine seems to have lost all hope. “Empty Chairs at Empty Tables” is taken unusually fast, which helps to keep it from becoming an interminable bucket o’ angst.

Avi Toldano and Tal Amir are both tolerably cute as Marius and Cosette; she especially has the soft voice characteristic of this cast. Shulamith Aharon sounds perhaps a little too mature to be playing Eponine, though her voice is pretty.

Yovel Dor, like most of the other pre-Broadway-production Enjolri I’ve heard, has a very soft and un-commanding voice. Yeah, it’s a nice contrast from Michael Maguire and the G.I. Joe Enjolras stereotype modeled after him, but it’s still not particularly impressive.

The Israeli production was a non-replica version of the show and comes from the period before the orchestrations were as set as they are now; the difference doesn’t come across in the music as much, but there are still little moments of reorchestration and different harmonies to spice this recording up.