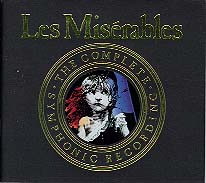 It was wonderful, in theory. The complete and absolutely uncut version of Les Misérables, showcasing an international cast that included members of the excellent but obscure Australian productions. But then, to borrow from “I Dreamed a Dream,” it all went wrong.

Who was good and who was bad almost doesn’t matter. What’s most disappointing about the Complete Symphonic Recording, in my view, is how fragmented it sounds. Many of the performers never even met each other face to face, having been recorded in different studios across the world and mixed together later, and consequently no chemistry developed between characters. The whole thing, in fact, sounds subtly but significantly disjointed, be it the cacophony of different accents or the way no one seems to be exactly with the orchestra at any time. No consistency of vision, interpretation, or style exists on this recording.

Philip Quast, Anthony Warlow, and Michael Ball do put in good performances. Quast is in better form on the Tenth Anniversary Concert recording, and Ball can be found on the original London recording as well as this and the TAC, but Anthony Warlow’s Enjolras is one of the few reasons to buy this recording. (The other, more prominent, one being that no other complete, official recording exists in English.) Warlow is audibly bored in the role and tries to make up for it by over-emphasizing random words, but his voice is still gorgeous.

That, unfortunately, exhausts the good on this recording. Gary Morris as Valjean is a trainwreck who must be heard to be believed–in the pithier parts of the role he overacts painfully, and when the time comes to show off his voice all he shows off is an excessively heavy vibrato. I’ve heard he’s a country singer more than a theater singer, and don’t doubt it. The rest of the cast members have some factor to mitigate how badly they suck; he doesn’t.

Kaho Shimada, who also appears on the Japanese red and blue recordings, is a bit harder to judge. Her Eponine is sweet, shy, quiet, rather like Marius’ pitiful shadow. It’s an interesting interpretation and certainly endears me more to her than to Eponines who shout their way through the role, but the whole thing has been thrown horribly awry by the fact that she doesn’t speak English. She had to learn the part phonetically, and her accent is wildly distracting. Perhaps it would have been less so if she’d stuck to a uniform Japanese accent, but her attempts to speak natural-sounding English sound labored and teeter back and forth between a bizarre variety of regional accents. Her Eponine is lovely, but sounds best in Japanese.

Debbie Byrne’s Fantine is rather unmemorable. She sounds a bit like Patti LuPone. Tracy Shayne as Cosette is both sweet and shrill, appealing one moment and intolerable the next. Gay Soper as Mme Thénardier sounds old and shrewish, and also shrill, which could fit the character but annoys listeners. Barry James’s Thénardier, for better or for worse, is more sinister than comical.

If you really must have complete version of the show, buy this recording, but get it used. It’s not worth the $50 or more most places charge for it. As far as complete recordings go, it’s been surpassed by the 2003 Czech version; as far as international casts go, the Tenth Anniversary Concert leaves it in the dust.