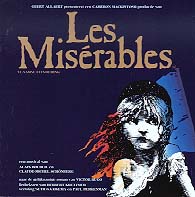 Of the European recordings, this one is second only to the Paris revival cast recording. The Belgian cast performed alternately in Flemish and in French; the recording is in Flemish, which means the lyrics aren’t anywhere on par with the PRC but gives us a much better Dutch version than the Amsterdam cast.

This version has the best orchestra I’ve heard on a Les Mis recording; the cast is solid, but probably wouldn’t sound as phenomenal without the extra oomph from the orchestrations. This is particularly noticeable in the very rousing renditions of DYHTPS and One Day More. Hans Peter Janssens’ voice is perhaps a trifle low for Valjean; Hilde Norga has a very sweet voice; Chadia Cambie sounds rather harsh in AHFOL but redeems herself in On My Own; Rein Kolpa is all right, though he sounds like a bit of a dolt at times.

Frankly, the worst thing about this recording is that it’s only highlights.