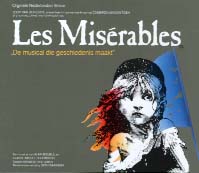 Despite a cast that looks like an all-star list of Dutch musical theater actors, this recording is awful, easily the worst of the officially sanctioned recordings. (Not touching that Korean travesty.) One might point out that Pia Douwes and Joke de Kruijf were both very early in their careers in 1991, but any production that can get both of them, and Henk Poort, to collectively suck has bigger problems than rookie troubles or actors having an off day in the studio. The overall impression from this recording is harsh, grating, and ultimately lifeless; I’d be tempted to blame it on the harshness of the Dutch language if it weren’t for the loveliness of the Flemish cast and the Dutch recordings of other musicals. Bad lyrics, an over-emphasized percussion section, and a 45-year-old Enjolras are just the icing on the cake.

If you’re interested in the early work of any of the actors or actresses on this recording, by all means, buy it. If you want a good recording of Les Misérables, save your money.